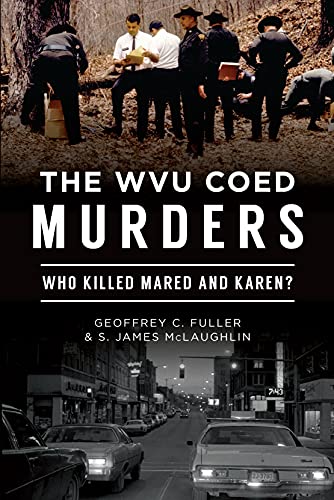 The year is 1970- and in Morgantown, West Virginia, two girls, Mared Malarik and Karen Ferrell are mysteriously murdered. The WVU Coed Murders is a story of two WVU Freshmen girls that left a show at the Metropolitan Theatre in downtown Morgantown and entered a cream colored sedan, never to be seen alive again.

Geoffrey C. Fuller has written for literary and commercial magazines and contributed to twenty-five fiction and nonfiction books. He is the author of the novel Full Bone Moon and the true crime books Pretty Little Killers and The Savage Murder of Skylar Neese (a New York Times bestseller).

S. James McLaughlin is a podcast producer of Appalachian Mysteria. Written and produced in West Virginia, the series covers unresolved cases in Appalachia. McLaughlin studied journalism at West Virginia University and graduated with a degree in graphics technology from Fairmont State University.

McLaughlin published a synopsis of the case on Reddit which was crossposted to Facebook and passed on to Geoff Fuller. She also shared the story in person with new friend and podcaster, Kendall Perkinson. These two events serendipitously led to the creation of the podcast and eventually the book.

Go deeper with fresh discoveries, additional evidence, and more of the case that we just couldn’t fit into the podcast, including a new suspect with a history of attacking hitchhiking WVU coeds.