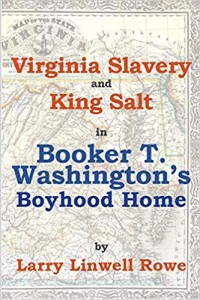 Larry L. Rowe, an attorney and state legislator in the hometown of Booker T. Washington, has written a bold, and at times raw, history of slavery and how eastern Virginia slavers kept a death grip on the new republic’s morality, politics, and economy in each of the three constitutional epochs: 1776 Revolution, 1787 Constitutional Convention, and 1861 Civil War. It details slavery in Virginia and throughout the South and as it was exploited by Kanawha industrialists to produce salt before the terms “industry,” “factories,” and “Industrial Revolution” were used.
His work is in two books divided by the Civil War. Book One is now available, Virginia Slavery and King Salt in Booker T. Washington’s Boyhood Home. That book tells the story of the Ruffner family, the booming salt industry they created as “Salt Kings,” and the Virginia slavery they adapted for forced labor on the frontier.

A discussion of the book will be followed by a Q&A and book signing.